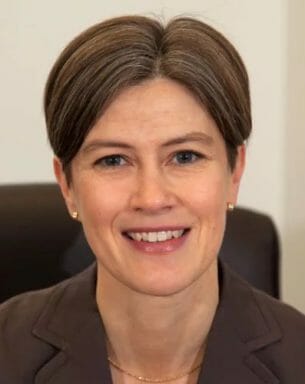 On Tuesday May 16th 2017, Queen Square Private Healthcare welcomed an audience of GP’s, other primary care professionals and charity representatives to the lecture theatre in Queen Square for a seminar with Dr Sofia Eriksson, consultant neurologist and clinical lead for neurological sleep disorders at the National Hospital for Neurology and Neurosurgery.

Dr Eriksson began her presentation by discussing basic sleep facts.  She explained that sleep can be divided simply into REM (rapid eye movement) sleep and non-REM sleep, with non-REM sleep further divided into light and deep sleep.  As demonstrated in the normal hypnogram in Figure 1, individuals will tend to experience deep sleep (stage 4) earlier in the night (accounting for 15-20% of total sleep), with REM sleep (accounting for a further 15-20%) typically appearing later on. The rest would consist of generally light sleep (stage 1-2).  She explained that the amount of sleep an individual should aim for, and the quality of sleep they may actually get, varies with age. Commonly, the amount of sleep an individual needs decreases with age, starting with newborns who would commonly need 12-18 hours of sleep per night, which then decreases to adulthood where the average is 7-9 hours.  Sleep architecture also varies with age with younger people tending to experience more deep and REM sleep, compared to older people where sleep is generally lighter. This information may be useful when taking a history and distinguishing between various sleep disorders since it is evident that conditions related to deep sleep would tend to occur earlier in the night, and conditions relating to REM sleep occurring later on. 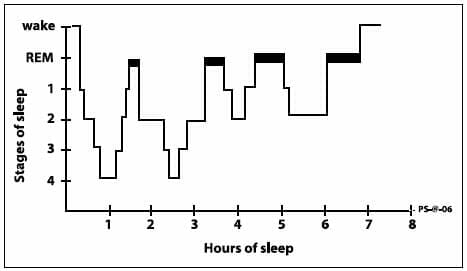 Dr Eriksson then introduced the International Classification of Sleep Disorders (ICSDIII) which divides sleep disorders into the following categories:

Dr Eriksson explained that insomnia is defined as a difficulty in either initiating or maintaining sleep and/or poor sleep quality without any underlying organic cause (such as periodic limb movements).  Insomnia can often lead to distress and anxiety, particularly due to its effect on daytime function.  She explained that insomnia has been associated with increased risk of cardiovascular heart disease, risk of falls and work/traffic accidents, yet most studies have not found an increased mortality rate.  Crucially, depression is common in people with insomnia yet whilst treating insomnia may improve depression, treating depression has not been shown to decrease insomnia.

Cognitive Behavioural Therapy (CBT) is the most common treatment for insomnia, although hypnotics and other sedative drugs may also be indicated.  CBT (including psycho-education, behavioural change and cognitive techniques) is regarded to be highly effective, with 70-80% of sufferers experiencing a response.  Medical treatment using over the counter preparations such an antihistamines have a limited evidence base and are also regarded to be difficult to monitor effectively.  A larger evidence base exists for the use of sedative medications and prescription hypnotics.

Dr Eriksson then proceeded to discuss the sleep related breathing disorders, a group of conditions characterised by an abnormality of the respiratory pattern during sleep.

Obstructive Sleep Apnoea (OSA) is most common, affecting 1-9% of the population.  It is commonly associated with increased age, obesity, drug and alcohol intake, tonsillar hypertrophy and retro/micrognathia. It is more common in males than females and is associated with increased risk of hypertension, stroke, coronary artery disease, arrhythmia, insulin resistance and cognitive impairment.

Overnight evaluation of oximetry in the patient’s own bed is often used to identify OSA.  Desaturations of 4% are regarded to be apnoea, and the extent of the OSA can be classified using the apnoea/hypopnea index and differentiated based upon the number of desaturation episodes in a given period (mild = 5-14/hour, severe = >30).  This technique for evaluation is associated with 87% sensitivity, although has only a 65% specificity for OSA.  Inpatient polysomnography is also an option, and includes a vast range of concurrent tests.

Treatment for OSA commonly includes lifestyle changes such as weight loss, decreased alcohol intake and changes to sleeping position, but may also require CPAP, the use of mandibular advancement splint devices and surgery (though surgery is used more often for snoring).

This term describes conditions where patients will experience excessive tiredness or sleep too much, such as narcolepsy, idiopathic hypersomnolence and insufficient sleep syndrome.

Narcolepsy is a chronic neurological disorder which is caused by the brain’s inability to regulate sleep-wake cycles normally.  It is associated with frequent daytime naps but fragmented nighttime sleep and sufferers will often display a very high Epworth Sleepiness Score (often the maximum).  It has a prevalence of 0.02-0.05% and can have an age of onset of anywhere between 5-60 years of age, although peak onset is typically between 15-35 years.  There is no remission although the condition tends to plateau after a few years.    It typically involves features of REM phenomena intruding into wakefulness and non-REM sleep and is categorised by ICSDIII into two types – Narcolepsy type 1 (with cataplexy) and Narcolepsy type 2 (without cataplexy).

Dr Eriksson explained that the cardinal symptoms of narcolepsy include:

It is important to note that a patient with narcolepsy has no greater total sleep in a 24 hour period than someone without narcolepsy.  As shown in Figure 2, narcoleptics will have frequent naps during daytime hours which consist commonly of REM sleep.  REM sleep should not occur in early sleep and is a salient abnormal feature of narcolepsy. 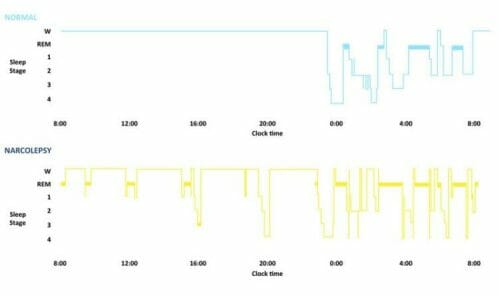 As explained, cataplexy is common feature of narcolepsy (70%).  This is a sudden and temporary loss of muscle tone ( from seconds to minutes duration) such as head nodding or knees buckling, but does not involve impairment of consciousness.  The mechanism of cataplexy can be explained by the switching on of the paralysis of REM sleep in isolation.  Various risk factors have been identified, including a weak genetic predisposition and environmental factors such as head injury, change of sleep pattern and infections.  Also, a link with immunisations has been suggested, with an increase in cases identified following the programme of swine flu immunisation.

Diagnosis is made using night time polysomnography and daytime multiple sleep latency testing, where patients are asked to take a nap at 5 strategic points during the day.  A mean sleep latency of less than 8 minutes is suggestive of narcolepsy, and the presence of 2 or more episodes of sleep onset REM is abnormal.

Whist there is no restorative treatment for narcolepsy, various medical treatments for excessive daytime somnolence are in use.  Some patients prefer non pharmacological treatment such as improved sleep hygiene and planned daytime naps, due to the side effects sometimes associated with the use of stimulants.  Furthermore, Dr Eriksson explained the importance of identifying patients who may be pregnant or taking the oral contraceptive prior to prescribing stimulants such as Modafinil.

Idiopathic Hypersomnia is also identified as excessive daytime somnolence with abnormal multiple sleep latency testing, but can be differentiated from narcolepsy since sufferers should not have more than two episodes of REM sleep during these naps.  Such patients will also often have prolonged sleep times (12-14 hours) and will not have cataplexy.  Patients will often not feel refreshed after naps and will experience “sleep drunkenness”.  There is currently no licensed treatment.

Insufficient Sleep Syndrome is the most common cause for excessive daytime somnolence, affecting 20-30% of the population.  In such patients, sleepiness will not relate directly with sleep debt and whilst there is an increased risk of accidents and potentially other health implications, most patients do not seek medical attention.  Sleep times (as recorded in sleep logs) are usually shorter than expected for age and typically, patients will sleep longer if sleep limiting measures such as alarm clocks are not used.  Dr Eriksson noted that it is extremely common for most people to overestimate their overnight sleep time.

Dr Eriksson prompted the audience to keep updated with DVLA rules on excessive sleepiness and driving, which are constantly being updated.  Often, patients must not drive even in the event of a ‘suspected’ diagnosis yet to be confirmed and difficulty can exist because the term ‘sleepiness’ is not well defined within current guidelines.

Dr Eriksson then proceeded to discuss parasomnias – abnormal events occurring in association with sleep.  She explained that these are classified according to the sleep stage from which they occur;

Non-REM Parasomnias typically occur in the first third of the night, with 1-3 episodes per night and a varying frequency, often with a childhood onset.  Events may include:

A family history is common and sufferers will often experience an exacerbation of the sleep disorder by sleep deprivation, fever or stress (supporting the varying frequency of such events).  They will often be amnesic for the event but describe the event as dreamlike but often unpleasant.  Treatment typically involves reassurance, sleep hygiene review and avoiding identifiable triggers, not to mention ensuring the patient’s safety at night.  Medical treatments such as antidepressants may also be used.

REM-Sleep behavioural disorders (RBD) typically occur in the second half of the night, with 1-2 episodes per night, a varying frequency and a mean age of onset of 50-65 years (with a male predilection).

Patients will experience a loss of the normal atonia during REM sleep and have a history or observed motor activity during REM sleep.  Dreams are often vivid with some recall and it is not uncommon that partners may suffer injuries.  Its prevalence is unknown but estimated to be around 0.4% of the general population.   Treatment typically involves discontinuing drugs that may contribute, ensuring patient safety and medical treatments, with melatonin being well tolerated. Dr Eriksson explained that such disorders have been identified as a precursor to neurodegenerative disorders such as Parkinson’s disease, Dementia with Lewy Bodies, MSA and mild cognitive impairment.  Therefore, caution should be exercised in providing a diagnosis of RBD in view of the potential prognosis.

Dr Eriksson then proceeded to discuss limb movement in sleep.

Periodic Limb Movement is characterised as repetitive limb movements every 5-90 seconds with a frequency of more than 5 events per hour.  Such movements only become clinically relevant if they cause arousal and subsequent daytime sleepiness i.e. a difficulty in sleep maintenance.  It is associated with restless leg syndrome but this tends to present as a difficulty in sleep initiation, rather than maintenance.  Restless Leg Syndrome is also characterised as an urge to move the legs, occasionally accompanied by uncomfortable and unpleasant sensations in the legs which would begin or worsen during periods of inactivity, particularly late in the evening or at night.  Moving the legs will often partly or totally relieve the unpleasant sensation whilst the activity continues.

Treatment for periodic movements of sleep and restless leg syndrome include stopping medication that may be contributing to symptoms, avoiding factors that may exacerbate symptoms, checking and maintaining iron levels and other medical treatments such as anticonvulsants, benzodiazepines and opiates.

In what was a highly engaging, interactive and comprehensive session, Dr Eriksson provided a lot of information on the various sleep disorders which may present to general practice. She summarised the seminar with the following take home messages:

For further information on this topic, or to contact Dr Eriksson to discuss a referral to her clinics in Queen Square, please contact Gayle Goodwin at gayle.goodwin@phf.uk.com or 020 8712 4550.

The next Queen Square GP seminar will be on July 11th 2017, when Dr Richard Sylvester will be discussing traumatic brain injury and concussion.