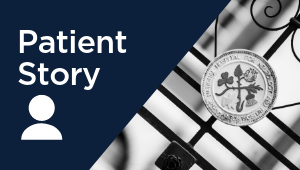 A subarachnoid haemorrhage is a serious condition caused by bleeding on the surface of the brain (the subarachnoid space). There are often no warning signs but the condition is life threatening and a serious medical emergency.

Jane was a diagnostic radiographer and worked for the NHS for 20 years before becoming a Senior Lecturer in Diagnostic Radiography. In 2014 she suffered a subarachnoid haemorrhage which changed her life. In this article Jane discusses the symptoms she experienced, the treatment she received and her recovery.

Symptoms of a Subarachnoid Haemorrhage

Jane first noticed symptoms after waking one night with a ‘thunderclap’ headache which she initially thought was due to the cold she had at the time. It wasn’t until she struggled to lift her head off the pillow that she thought it might be something more. She later describes the headache as literally being hit over the head with a baseball bat and not a normal kind of headache for her. Other symptoms of a subarachnoid haemorrhage may include light sensitivity, neck stiffness and sickness.

Being an experienced radiographer her first thought was in fact that she was having a subarachnoid haemorrhage but told herself to stop being a drama queen and that it’s most likely just a bad headache.

She tried to go back to sleep but then it got much worse.

The A&E nurses initially thought the same as Jane and that it was just a bad headache, possibly caused by the cold. Then an examination from the A&E Doctor changed the diagnosis to viral meningitis. A CT scan and lumbar puncture was ordered because Jane was over 40 and they did need to rule out a subarachnoid haemorrhage. A CT scan was done but then a second CT scan with contrast was needed and that was done about an hour later. An hour after that, Jane was moved to a short stay ward and on the way, the Doctor informed her parents that they needed to take Jane to a quiet place. Jane was well aware of what was going on and suspected an aneurysm so she asked the Doctor and the Doctor confirmed straight away.

Once the aneurysm was found Jane was blue lighted to a neuro hospital and on arrival, had a lot of people around her; hooking her up to machines, doing examinations and monitoring her situation. Another set of scans followed and on the back of those results, a neuro interventional radiologist told her they needed to act quickly.

Jane was quickly taken to theatre where Doctors embolised the aneurysm with specially designed platinum coils designed to pack it and prevent it from bleeding.

Recovering from a Subarachnoid Haemorrhage

Jane was taken to the neuro intensive ward to recover and still had a headache and unfortunately things got much worse when she picked up hospital acquired pneumonia and ended up back in intensive care.

Two weeks later though, Jane was discharged from hospital though and everything was fine.

Jane is now doing well although admits she’s still not 100% of the person she was beforehand. Impressively, she did manage to hold down her job and is able to cope with day to day life experiences. She does get tired a lot but is able to work that into her day to day routine. For example, if she has a heavy day at work, she knows she probably won’t be able to go out in the evening.

Queen Square Private Healthcare had a massive role to play in Jane’s recovery once the NHS had signed her off post surgery. A lot of people aren’t aware of the cognitive and psychological damage an experience like this can have as it can leave people (including Jane) feeling like they’re not the same person.

Jane visited Queen Square to work with a neurologist to improve her cognitive problems and also come to terms with the fact that she’s not the same person she was before the subarachnoid haemorrhage. It also helped to talk about the fact they she suffered a near death experience as it’s something very hard to cope with.

“The psychological help I got through Queen Square was amazing”

Three years on from the subarachnoid haemorrhage Jane feels like this is the year that she starts to really live her life again after working through the recovery and tackling all of the psychological issues.

Jane recommends finding support groups on social media which are helpful because everyone shares and people understand what you’re going through. She also strongly recommends The Brain and Spine Foundation which has a lot of information on exactly what you need, it now has a forum and you can make friends.

If you experience any of the symptoms discussed in this article call 999 straight away as it’s a medical emergency.